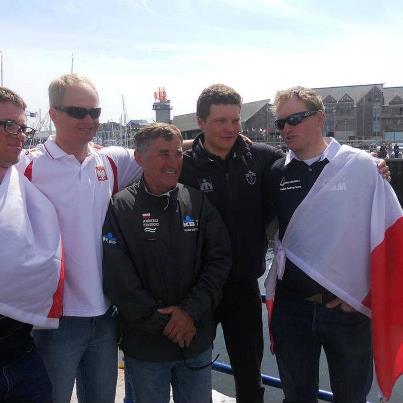 Finn Gold Cup 2012 was held off the coast of the English town of Falmouth, near the most South – West corner of England – in the district of Cornwall.

The world championships regatta was scheduled for 11 races, but because of the changing weather conditions only nine races took place. The regatta was launched with 95 competitors from 30 countries. The age range of competitors was wide, since the youngest participant was 14, and the oldest 73 years.

The main favorite, and the host, a Briton Ben Ainslie, having won seven of nine races, and finished two in the third position, was acknowledged with the world championship gold medal. This victory secured his sixth world champion title in the Finn class – an amazing achievement, which proves that in sport there are no barriers, and training makes the champion. Silver medal was given also to a Briton, Ed Wright (World Champion 2010), and a bronze medal to Jonas Hoegh Christensen (World Champion 2009) from Denmark.

Together with the Polish Finn team, which included: Rafal Szukiel, Piotr Kula, Michal Jodlowski, we fought intensively for the Olympics qualifications of our country. Finally, after six days of racing, Piotr Kula finished in the 6th position, Rafal Szukiel in the 19th, Michal Jodłowski the 56th , and I finally ended up as the 41st.

I’d like to give a special recognition to Piotr Kula for great sailing and huge progress made in recent months. His final result, in the 6th position, secured Poland’s Olympic qualification in the Finn class and ruled in his favor in the internal national qualifications for London 2012 Olympic Games.

The qualification would not be achieved if not for the hard work of the wholePolish Finn under the leadership of our coach – Andrzej Piasecki, who at alltimes was able to create an amazing atmosphere favoring hard work, by approaching each of us with his effective didactic skills.

This regatta was the most difficult and the most successful of all the three Olympic qualifications regattas, in which I took part. The first half of theregatta was held in light winds from the coast, in conditions which I had difficulty finding a good rhythm and speed while sailing upwind. However, once sailing downwind, I managed to gain a significant advantage over other sailors and make up lost positions. In the second half of the regatta I found the right rhythm in the difficult nautical conditions with strong winds and waves reaching up to 5 meters. By adapting to the weather conditions, the ocean’s potential and strength, I sailed with precision and composure, which eventually led me to competing with the top leading sailors.

At the end of the regatta, we participated in the Olympic Torch relay in the town of Falmouth, as the representation of Poland – Polish Team Finn. This event was a unique moment for the whole crew. This relay began the travel of OlympicTorch around Great Britain until the start of the London 2012 Olympic Games onthe 29th of July.

The past months have been loaded with intensive work and training, during which I gained huge experience and I was given a chance to compete with the best sailors in the world. At the moment I plan to start the next stage of training. At first – physical conditioning training at CityZen Poznan and then, in the second half of June, sailing training with the Polish Finn team in Puck, Poland.

I would like to thank my sponsors, partners and all the relatives for the great support in this intense period of the Olympic qualifications regatta.